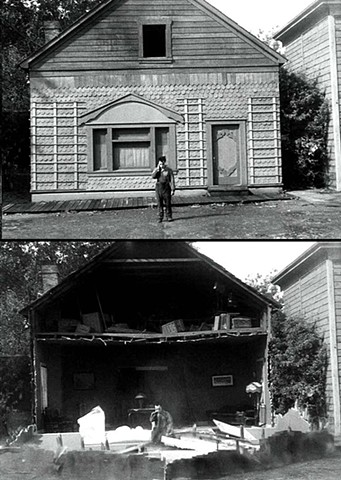 I think there's a certain state of grace common to both minimalist sculpture and slapstick comedy: a sort of simultaneous manifestation and suspension of the laws of physics that allows the viewer to savor the “hero"'s predicament, not just intellectually, but in a fully embodied way. For example:

Though not usually thought of as funny, the physics of Richard Serra’s “One Ton Prop (House of Cards)” allows it to function as a kind of suspended pratfall: an idea poised forever on the brink of coming fully to ground.

And in “Steamboat Bill, Jr.”, the comedy and pathos of Buster Keaton’s desire to redeem himself in his father’s eyes is registered, not in words, but on his body (and by extension, on ours), as he plunges through a series of collisions and near-misses into the hurricane.

This struggle between a work’s material conditions and what might be called its aspirations, has been a common thread in my work over the years. It's visible in the way the ephemeral (effects of light on translucent and reflective surfaces) and the provisional (the hang of stretched and draped materials) are both enabled and undermined by the necessities of structure and gravity. And it's visible in the way that seemingly mismatched materials are able to find a charged balance, nudging their awkwardness closer to grace.