For the past few years I’ve engaged in the yearly practice known as Counting the Omer. Most simply, this is the marking of the forty-nine days between Pesach (commemorating the exodus from Egypt) and Shavuot (commemorating the receiving of the Torah at Mt. Sinai). A further elaboration involves a little Kabbalistic math.

Kabbalah is the central path of Jewish mysticism, and its origins are untraceably old. However, it is in Sefer Yetzirah (“Book of Formation,” probably dating to the Talmudic era [somewhere between 200-500CE]) that we first encounter a central construct of Kabbalah, the ten sefirot (sefirah, s.). Usually arranged in a diagram called the Etz Chayim, or “Tree of Life” (see below), the sefirot are the revealed aspects of an otherwise unknowable Divinity. Each sefirah is associated with a particular set of attributes (wisdom, understanding, love, judgement, compassion, etc.), and during the period of the Omer, the mystically inclined methodically pair the sefirot as a kind of meditation practice.

The math goes like this: each week is assigned to one of the seven lower sefirot (considered more accessible than the abstract upper three). In addition, each day of the week is assigned a sefirah. In this way, forty-nine pairings are achieved, one for each day of the Omer. The seven lower sefirot are Chesed, Gevurah, Tiferet, Netzach, Hod, Yesod and Malkhut, and most simply (each has many attributes), they are: Love, Discipline (or Judgement), Compassion, Endurance, Humility, Foundation (or Covenant), and Kingdom (or the indwelling presence of the Divine in our world).

Typically, I have marked the counting of the Omer with writing. For instance, in 2016 I used the pairings of the sephirot to write about my process as I converted to Judaism, and in 2019 I used the same process to write about my growing involvement with the Chevrah Kadisha (the Jewish “holy society” tasked with attending to matters of sickness, death, dying, and mourning [among other things]. Another story for another time). In 2020 I engaged in my first non-verbal counting: each day of the Omer I added a line to a cumulative drawing which ultimately consisted of 49 lines (a short video showing the daily assembly of the drawing can be seen here).

This year I decided to do a musical counting. The genesis of the idea came from my realization that the flow of energy through the sefirot resembles the flow of electricity through a musical synthesizer. Coinciding with the deepening of my interest in modular synthesis (the interrelationship of distinct “modules” with distinct functions in the creation of electronic sound), this realization led me to create the diagram below (here paired with the classic Etz Chayim): 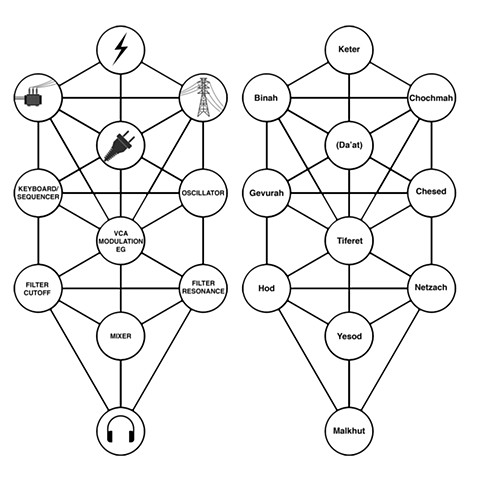 About the Project
next >

First, you’ll notice that there are eleven nodes in these diagrams, whereas I said there were ten sefirot. The eleventh node, Da’at (“Knowledge”), is only sometimes included, sort of like how Pluto is only sometimes included among the planets. Da’at is seen as the blending point of the upper three sefirot––Binah, Chochmah, and Keter. Which brings us to our next point, the columnar structure of the Etz Chayim. The three columns have different properties: on the right, the sefirot can be seen as expansive and unbounded, typified by Chesed’s free-flowing Love; on the left we have contraction and restraint, typified by Gevurah’s reigning-in of Chesed with Discipline. Neither left or right is better than the other––both are necessary. Which brings us to the middle column, the trunk of the Etz Chayim. Each of the sefirot in this column is a balancing point between the forces on the left and right: Da’at balancing the upper three sefirot; Tiferet balancing Chesed and Gevurah; Yesod channeling the sefirot above it into a single stream, which is received, at last, by Malkhut, aka us.

But you’ll also notice that all the sefirot are interconnected, allowing energy to flow in every direction. Which brings us to the synthesizer. When I’m making music, I can connect the distinct modules in any way I choose, and these connections produce a wide variety of results. It’s all about where the voltages flow, and in what amounts. In the following scheme, I’ve associated the functioning of these various modules with the characteristics of the corresponding sefirot. This is what I ended up with:

Keter is undifferentiated Divine energy, known in Hebrew as Ein Sof, and correlated here with the electro-magnetic field. Chochmah, Wisdom, is the pre-verbal point at which Ein Sof first makes its appearance in our consciousness. I’ve made the analogy here to the electrical grid––an expression of the electro-magnetic field which is in the human realm, but still relatively inaccessible to you and me. Binah, Understanding, is where inspiration becomes conception becomes language. In my scheme, this is the transformer, converting the grid’s pulsing potentiality into energy we can use. Da’at, Knowledge, is here likened to the connection between plug and outlet; the channel through which the upper energies enter our system, the lower seven sefirot, aka our synthesizer. Chesed, expansive source of love, is my oscillator. An oscillator just produces unmediated sound––electro-magnetic waves in the audible spectrum. The only variables at this point are frequency and wave shape. Gevurah is where we introduce discipline to our sound. I’ve imagined that here as the division of the oscillator’s undifferentiated stream into distinct packages (i.e. notes) which change over time. This can be done in various ways, most typically with a keyboard or sequencer (a generator of repeating patterns), both of which I used in this project. Tiferet is where Chesed and Gevurah, sound and structure, come into balance. I’ve imagined this as modulation––extending Gevurah’s change over time to include LFOs (low frequency oscillators whose waves are subaudible but can be used to influence and change other elements), VCAs (voltage controlled amplifiers which control the amplitude of voltages within the system, and which can in turn be controlled by external elements such as LFOs), and EGs (envelope generators, which determine the shape of the notes or voltages produced by the elements above. These, too, can be modulated to change over time). Netzach and Hod. All sefirot can also be mapped onto the body, and Netzach and Hod are generally thought of as the legs. They can also be thought of as the kidneys, and it’s this interpretation that I use here. Netzach and Hod, then, are my filter. A filter generally has two parameters––cutoff and resonance. Cutoff determines the range of frequency that the filter lets through, while resonance augments the frequencies at the edge of the cutoff’s boundaries. Netzach, being on the side of expansion, therefore becomes resonance, while Hod, on the side of contraction, becomes cutoff (a kind of “humility” of sound). Yesod is where it all comes together, and so it becomes my mixer. It doesn’t make sound of its own, but it channels and shapes all the sounds before it. Malkhut, finally, is where the sound from above enters our ears.

Which brings us back to the Omer. So how does all this work within the Omer’s matrix of forty-nine days? Well, something like this: For each of the first five days of each of the first five weeks, I produced a new composition focusing on the combined elements of the day. So, on the first day of the project, Chesed of Chesed, I focused solely on the oscillator. For day two, I looked at the influence of sequencers on oscillators. And so on through the weeks of Chesed, Gevurah, Tiferet, Netzach, and Hod. The sixth day of each week, Yesod, was devoted to mixing the results of the previous five days into a single, longer, “suite.” Finally, on the seventh day of each week, the day of Malkhut, I responded to this mix with additional, non-synthesized, “worldly,” instruments (a guitar, an autoharp, a shruti box, and a kalimba), attempting to enact our reception of energy through the network of the sefirot, as well as our obligation to send that energy back to its source.

Finally, for the last two weeks of the Omer, Yesod and Malkhut, I no longer focused on sound production but on final mixing (during Yesod), and on releasing these mixes to the “world” (i.e. you) via various platforms, as I’m doing now during the week of Malkhut. The resulting “pieces” are not meant to be dogmatic (although they were more so at the beginning). Instead I have tried to prioritize musicality over rigorous adherence to the conceptual structure of the project. But in the end I hope that something of the spirit of the sefirot will come through. If not, I hope these attempts to synthesize the sefirot will at least provide a good listen! Headphones are recommended.